Tague Alliance members enjoyed a great 2014 and that was correlated with a solid industry result last year as well.  Below is the text of an article released by ISO on the industry results.

Net income for U.S. property/casualty insurers totaled $55.5 billion after taxes last year, coming as little surprise to experts who had forecast a $50-billion-plus result early this year.
In early January, Robert Hartwig, president of the Insurance Information Institute, gave one of the earliest forecasts of full-year industry income, predicting a figure just over $50 billion, along with a policyholders surplus level of $675 billion and a return on equity of 7.7 percent.
See related article, “Profit Estimated at Over $50B for 2014”
The official results published on Tuesday by ISO, a Verisk Analytics business, and the Property Casualty Insurers Association of America, showed Hartwig’s surplus forecast was right on the mark. But with net income coming in $5 billion more than expected, industry ROE was actually 8.4 percent. 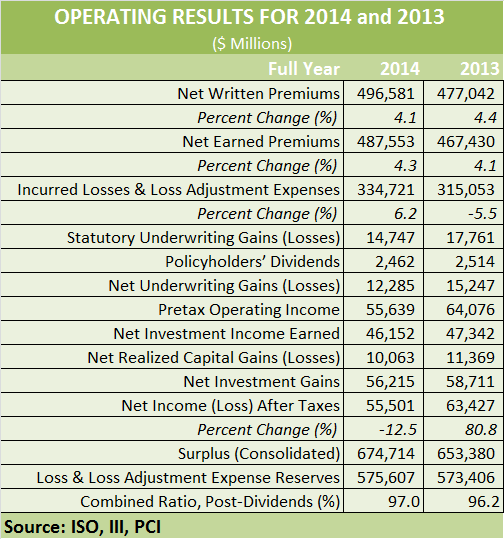 While the 8.4 percent return may have seemed disappointing when compared to the double-digit return of 10.2 percent for 2013, overall net profit came in at the second highest level since the financial crisis—surpassed only by the $63.8 billion profit number for 2013—Hartwig and Steven Weisbart, I.I.I.’s chief economist noted in a commentary about the ISO/PCI results.
In both years, insurers faced low levels of catastrophes but the catastrophe loss tally for 2013 was just a little bit better (lower) than 2014. Direct insured losses from catastrophes for both 2013 and 2014 fell far below 2011 and 2012 levels—among the costliest on record for catastrophe losses, Hartwig and Weisbart said, noting that in 2013, direct insured losses from catastrophes plummeted $22.1 billion to $12.9 billion.
According to the ISO/PCI report, direct insured property losses from catastrophes hitting the U.S. grew $2.6 billion to $15.5 billion in 2014 but this was still $7.2 billion lower than the 10-year average of $22.7 billion.
“Wildfires, winter storms, hail storms, and tornadoes all took their toll, but there was no single event that did enormous damage” in 2014, Hartwig and Weisbart they wrote in their commentary.
“The industry’s performance in 2014 could be considered a return to long-term trends, neither as strongly profitable as in 2013 nor as catastrophe-impacted as in 2011 and 2012,” they concluded.
In addition to modestly higher catastrophe losses, a lower level of investment income played a role in the driving the profit level for 2014 below 2013’s overall result. Investment income—primarily interest payments from bonds and dividends from stock holdings— dropped 2.5 percent to $46.2 billion.
Losses and Premiums Growing—But Not at the Same Rate
On the underwriting side, another highlight from the ISO/PCI year-end figures was the level of net written premiums, which jumped 4.1 and 4.4 percent in 2014 and 2013. Notably, however, the 2014 premium climb did not outpace the increase in total incurred losses, 6.2 percent, and the combined ratio inched up 0.8 points to 97.0 partly as a result of the difference.
Commenting on the 3-point underwriting profit for 2014, Beth Fitzgerald, president of ISO Insurance Programs and Analytic Services, said: “Right now, good underwriting results are a must for insurers. But with much of the improvement in underwriting results for the last two years attributable to moderate catastrophe losses and dependent on continued reserve releases, one has to wonder just how sustainable the net gains on underwriting will be.”
On a net basis (including deductions for reinsurance), catastrophe losses and loss adjustment expenses totaled $16.8 billion in 2014, up 20 percent over the $14.0 billion total recorded for 2013. Non-catastrophe losses totaled $317.9 billion in 2014, up 5.6 percent over 2013.
Lower levels of reserve takedowns during 2014 for losses incurred in prior years explained part of the increase in the industry’s incurred loss total for calendar year 2014. Overall, takedowns amounted to $11.2 billion in 2014, compared to $15.6 billion in 2013. The I.I.I. and ISO/PCI analyses both note, however, that much of the difference between the 2013 and 2014 levels of reserve takedowns (releases) is attributable to mortgage and financial guaranty lines of business. Excluding the guaranty businesses, reserve releases for other lines totaled $10.9 billion in 2014, compared to 12.0 billion in 2013.
Examining the top line, the economists at I.I.I. see continued exposure growth in the year ahead, noting that exposure changes and rate changes are the two determinants of net premium growth.
“Workers compensation is likely to remain among the fastest growing major P/C lines of insurance in 2014 if economic growth and hiring continue as projected,” Hartwig and Weisbart wrote in their analysis.
“With premiums for auto, home and major commercial lines all trending positively, overall industry growth could keep pace with overall economic growth in 2015, as was the case in the prior two years,” they said, noting that new vehicle sales are now back to pre-recession levels, and that residential construction recorded the best yearly numbers since 1999 last year.
“With the pace of real GDP growth expected to quicken in 2015 to nearly 3 percent, personal and commercial lines exposures—and the premiums they generate—should continue to expand modestly,” they said.
Fourth-Quarter Results: Combined Ratio at Record Low
Looking back at 2014, Robert Gordon, PCI’s senior vice president for policy development and research, noted the contribution of good fourth-quarter numbers from underwriting activities. “Property/casualty insurers had another moderately good year in 2014, with fourth-quarter results particularly strong,” he said, referring to net written premium growth of 4.8 percent and a combined ratio that was more than five points better than breakeven.
At 94.9, the combined ratio was the lowest recorded in nearly three decades, according to the PCI/ISO report. The fourth-quarter combined ratio has averaged 106.5 since 1986, the report said. 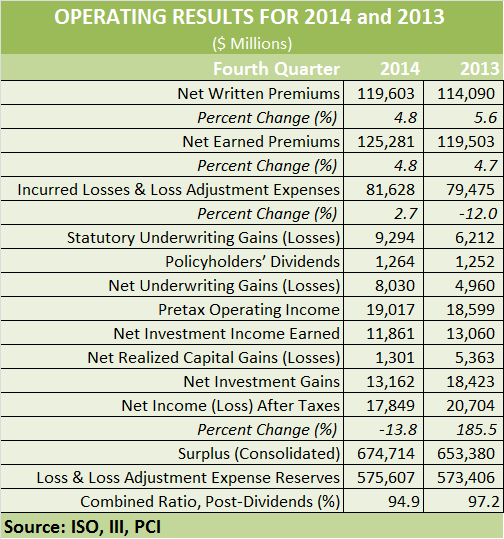 Net premium growth outpaced the increase in net losses, which was only 2.7 percent in the quarter.
Still, net income fell to $17.8 billion in fourth-quarter 2014, down nearly 14 percent from $20.7 billion in fourth-quarter 2013.
Significant declines in net investment income–a 9.2 percent drop to 11.9 billion–and a $4.1 billion decline in net realized investment gains—drove overall net income lower in spite of better underwriting results.